How I Was Introduced to the Pendulum 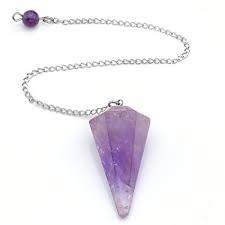 A year and a half after the death of my husband, a girlfriend at work suggested, “I think you should meet Shakti Wilson, a great teacher and healer.” She was teaching an introductory class to the pendulum and the SRT methods. I was open to anything, anything that would heal my broken heart.

The next Saturday we sat in a nondescript community room with tables with florescent lights. Shakti Wilson, the minister’s wife, showed us how to hold our pendulum, how to ask yes and no questions,
and how to know when the pendulum said yes and no.

Before this day, I had never held a pendulum. I had no previous experience. When in the first minute the pendulum moved to signal yes, to signal no – I was blown away. I was so excited I could do it. Then I learned to use a “Spiritual Response Therapy” Chart with the pendulum. I could ask a question and receive an answer.

I assumed it must be some sort of energy inside or outside of me. I didn’t worry too much about it. I prayed and meditated before I did the worked with the pendulum, I asked that the highest forces work through me, and I asked that the questions and received good answers.

I delved deeply into pendulum work. Shaki worked with me weekly and over a period of two years, I took all her workshops and became “certified” as a SRT Consultant. Then later, I wrote books about the pendulum, and created the Intuitive Chart System for Life and Work, which resulted in two books. Now my work, The Book of Pendulum Healing” will be released by Red Wheel/Weiser in January 2019.

It’s been fifteen years since I began this work! Years of working with myself and others and having almost daily spiritual experiences working with the pendulum and the charts. It’s such an exciting communication device. More later…